My cousin (Wesley Stone) took some really cute pictures of Chase today and put them into a slideshow for us. It was really good, so I thought I would post it for others to enjoy. Thanks, Wes!

Daddy gave Chase a bath tonight to give me a break. Abe yelled at me to come in and look at Chase. This is what I saw: 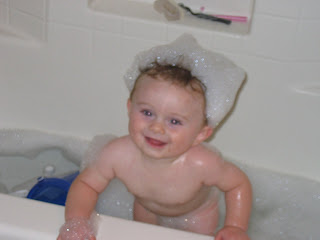 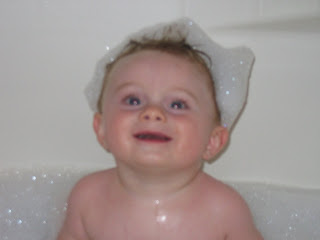 It is so nice to have friends that will encourage, exhort, listen, and be supportive. I am very grateful for friends and family that are there to help us on our journey in this world.

I received a card from a dear friend that was so kind and sweet today. It made me grateful for the gift of friends that God has given us.

Last night on our way home from shopping we drove by the drive-in movie theatres. Abe has been saying for a long time that he wanted to go with Chase. He looked at me and said lets just go right now. I immediately took him up on it. We exited the freeway, and went to go look for some dinner. After picking up Jack in the Box, we were on our way to the theatres.

There were lots of people in line, but we finally made it to the counter where you pay. It turns out that it is "cash only." One of the problems with spontaneity is that you can be unprepared. Neither of us had any cash, so we had to turn around. We were so upset. As we were trying to leave, the exit lanes were full of cars coming into the drive-ins, so we were just going to sit and wait for the traffic to clear. It looked like it was a 45-60 minute wait. I told Abe to go ask one of the gals at the counter if there was another exit. She said there was only that one exit. We told her that we had no cash, and that is why we were leaving. She asked us if there was something that we wanted to see on her side of the drive-ins. We said sure, and she let us in for free. It was so kind of her.

We saw Daddy Day Camp and we started I Now Pronounce You Chuck and Larry, but it was way too late to start another movie on a Saturday night. These were not our first choices, but beggars can't be choosers. Chase was awake for most of the first movie, but we had changed him into his pajamas which were nice and cozy. He was all ready for bed, and he eventually fell asleep in his carseat. We had a great time, and we will be going back soon with cash in hand :). It was a great experience!
Posted by The Abe Green Family at 7:32 AM 4 comments:

We got Chase a little inflatable pool to use at home on our porch. He likes the big pool, but sometimes it can get a little overwhelming. This is nice because he can splash and play with toys a lot easier. He is actually spending more time trying to climb out of the pool. That is one thing that I forgot to mention in his 9 month blog. He loves to climb on things and stand up. He climbs on everything-the bathtub, my legs, the couch, bookshelves, kitchen drawers, etc. Here on some pictures from this afternoon. 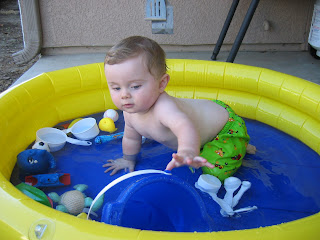 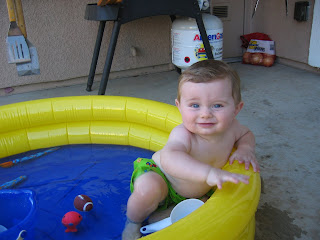 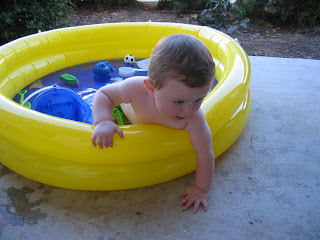 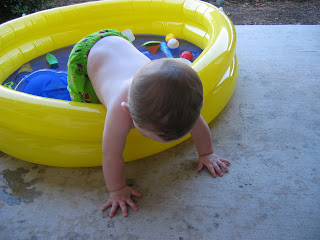 Well, today Chase is 9 months. It also happens to be my mom's birthday as well. We had a very full day. We went to have his 9 month pictures taken at JC Penneys. My sister (Chase's 4 year old aunt) also has her picture taken at the same time. They do a really nice job. It is getting much more difficult to have Chase's picture taken because he doesn't want to sit still. 2 months ago he just laid there and could hardly sit up on his own. A lot has changed. After pictures, we went to lunch at Plutos. Yum yum! We went home had a nap, and then ran out and did a few more errands. Tonight we also had a barbecue at my parent's house to celebrate my mom's birthday. Happy Birthday, Mom!

The biggest change since last month is that he is now crawling. He started scooting about a month ago, but last Friday he just got up on his knees and started crawling. It is so cute. We had to put little Robeez (leather slipper-like shoes) on him because he was rubbing his toes raw from scooting. I felt like a horrible mother. The little shoes totally solved the problem. He is always on the move. When he is awake, he is always moving all or part of his body. Head, hands, arms, legs, tongue, etc. It is pretty hilarious when he gets all of his extremities moving at once. Abe calls him our little "spaz."

The other big change this month is his struggle with separation anxiety. He never used to care who held him. For example, I could leave him in the nursery at church with no problem. Not anymore. He screams when I leave him in the nursery or the kids' room at the gym. It is awful. We are working on that. He is ok with certain people who he is familiar with (i.e. grandparents, cousins, aunts, uncles, etc). However, he is beginning to reach for me even when Abe is holding him. That is not going to fly around here, so he is going to have to mature a little. It is really strange to see him change so quickly in that area.

Time is flying by so quickly. Parenting is definitely becoming more challenging as he gets older. However, it gets more rewarding as he becomes more interactive. I am trying to treasure every moment. Sometimes I am tempted to resent the tiredness and all the work that goes into raising him, but I remember that this time is very short.

Here is a picture taken just now of our little guy sleeping after a long, hard day! :) We love him lots and lots. What a blessing! 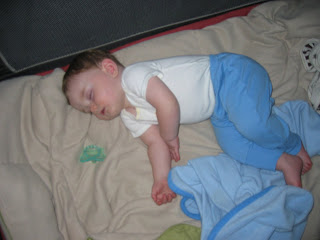