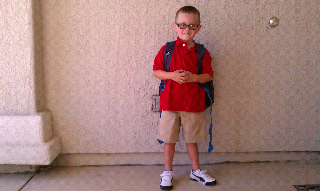 Chase had his first official day of school on August 15th. He was very excited to go. My Aunt Karen, Emily, and Valerie came over to be with us his first morning. They stayed home with Parker and Maggie while I took him to school.
When we got there, he was eager but also wanted me to stay with him until the last moment. He had a big smile on his face. He did a good job listening to his teacher and standing in line. Not an easy thing for an active 4.5 year old :) As the teacher told the kids to say goodbye to us, he ran over and gave me a big hug. So cute! I felt a twinge of sadness leaving my boy in someone else's care. However, I felt mostly ok with the whole idea.
I went back to pick him up with Bridget and Parker. He was SUPER excited to see us all. He said he had a good day, but didn't want to talk too much about it. He was too excited about our plan to go swimming after we left school. I asked if he behaved, and he said he only had a "few troubles." He said he talked a little bit and played in the bathroom. Not too suprising :)
Last week was a big week for us. Chase started school and Abe went on his first business trip. Abe left early Tuesday morning before the boys woke up. They woke up looking for him. My mom showed up later and watched the kids while I dropped Chase off. He looked a little overwhelmed walking in by himself, but he was ok. He was ok when we picked him up as well. That night my cousins came to stay with us which was super exciting.

Wednesday morning we woke up to Emily and Valerie here, and the boys were so happy to have them here. They played non-stop with them. Amazing amounts of help! The only problem was that Chase did not want to leave the fun. He cried and went and hid. So sad :( We got him ready and headed out to grab some lunch. He wasn't happy when we left, but we prayed for him. He had a good day, and was totally fine when we picked him up.

Thursday morning was another rough day. He was missing his Dad, and we were still having lots of fun at home. He said he didn't want to go, but we just kept on going. I walked him into school, and he was not happy. It breaks my heart to leave my sad little boy. After getting in the car, I totally fell apart. I just prayed and asked the Lord to calm his little heart. The Lord heard my prayers. His teacher reassures me he is totally fine within in minutes of me leaving. Abe came home that night which was a huge blessing!! The boys were so happy to see him not to mention me :)

Friday we woke up with just our family in the house. We had a calm morning. Chase got ready for school and was totally happy and ready for school. I dropped him off without one problem. Such an answer to prayer.

Chase's first week of school was filled with ups and downs. We made it, and the weekend was so refreshing and a nice break from the school schedule! Phew!!
Posted by The Abe Green Family at 9:45 AM 1 comment:

Here is our girl getting some exercise!
Posted by The Abe Green Family at 8:00 AM No comments:

Email ThisBlogThis!Share to TwitterShare to FacebookShare to Pinterest
Labels: Maggie 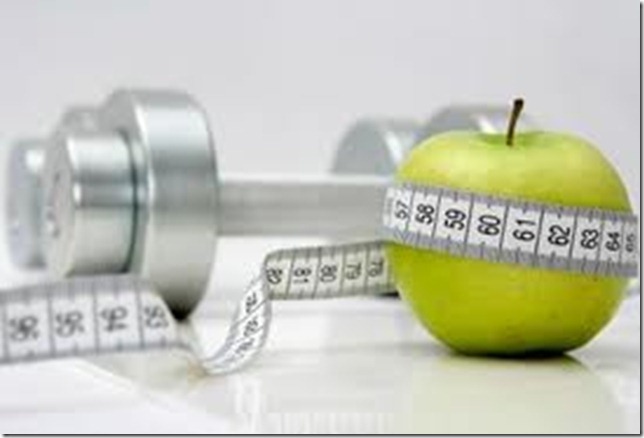 With all three of my pregnancies I have gained about 35 pounds. I lose the first 20 pounds really fast. Usually within a week or 2. The last 15 come off soooo slowly. It is hard work. It also has gotten more difficult to lose with each pregnancy.

For me it is always a shock to see a picture of myself when I am carrying extra weight. On an everyday basis it is difficult to see, but a picture sure makes it all clear

. This week I saw a picture of myself in a swimsuit. Let me just say I hardly recognized myself. It is time to get to work.

My eating is decent. I could definitely cut back on some junk food, but overall my eating is pretty good. I need to get to exercising. I started yesterday, and I hope to get back into running. I hope to get back to my normal self. I refuse to be a person who lets themselves go after having babies. I have too many examples in my life of people who have returned to normal after many pregnancies. I know it can be done, and I have done it twice already. I am ready for round 3!

My goal is to be “normal” by Christmas. Hopefully, I can reach my goal