Even though Chase is 16.5 months I thought I would give an update. It has been too long since I wrote a thorough update. He is doing so many new things lately. It has become very apparent that I easily forget the special little things that he does and says. It really bothers me that I can't remember things from just 2 months ago. I guess that it what blogs are for. :)

If we could use one word to describe Chase, it would be ACTIVE. He is always on the move. He loves being outside. He loves to point at stuff and walk over and feel and touch it. He is very tactile. He loves to look for kitties outside. At my grandparents' house he loves to play with the chickens. He feeds them and tries to pet them. My grandma let me know that he would love to sleep in the chicken coop if they would let him :)

Chase loves animials. He knows how to make the chicken, cow, dog, and kitty noises. He loves to look at animals in books. He also will point out different animals on the television.

Chase loves books. However, he has chosen 4 books that he likes. His favorite books at the moment are "Amazing Ants," "Ten Little Ladybugs," "Goodnight Moon," and "Corduroy." He asks us to read those books over and over. He also likes to sit on the floor and just turn the pages back and forth. It is so adorable.

He loves to look for the moon at night. He points the moon out in the sky. He also likes to point at the moon in books that we read to him.

When he sees pictures of himself, he will yell out "Chaaa." That is his version of Chase.

Chase also loves music. We listen to children's CDs in the car. He has chosen some favorite songs. His current favorite is "The Wheels on the Bus." He asks us to play it again by saying "gain." The same CD has "Turkey in the Straw" on it. As soon as that song comes on, he will yell out "Hay!" There is a certain part that talks about hay, so that is his way singing the song. At night I have started to hold him and sing a few songs before I lay him down. I started by singing 3 or 4 songs. The last song I started singing was "Praise Him, Praise Him." He will tell me to sing it over and over. I can't refuse him :)

When people walk into the room or Chase walks into a room full of people, he will say "Haaa." That is his version of "Hi." It sounds like he says "Hi" with a Texan accent. It is hilarious. Hope to get a video of that.

One of Chase's favorite activities is to sit in the front seat of the car and "drive." He will beg, whine, and plead with us as we are getting him out of the carseat to let him drive. He loves it!

He is also going through a naughty phase right now. He is hitting people. It is so discouraging. We have had to discipline him quite a bit for that lately. :( It is not easy to be faithful and consistent. We are working on it.

That is all I can think of right now. If you have gotten this far, thanks for reading. :)
Posted by The Abe Green Family at 5:44 PM 2 comments:

Chase decided that he wanted to help make oatmeal this morning for breakfast. He pulled up the little stool that we have in the kitchen up to the counter and was reaching for the bowl of oatmeal. He learned this new trick all by himself. It was fun to observe his determination and perseverance. It is so funny how much kids can do when they want something. :). 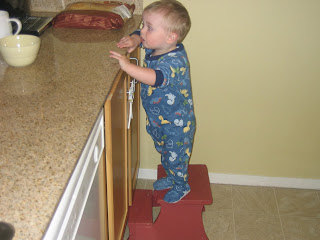